April 20, 1990, saw one of the largest ACT UP protests in history. A diverse crowd of hundreds of LGBTQ people marched through the streets of downtown Chicago, protesting the refusal of Cook County Hospital to admit women to its AIDS ward. The march culminated in the occupation of major street intersections and the plaza outside the Cook County government building, where protesters in hospital gowns sat on dirty mattresses hidden in alleyways overnight. They were cheered on by attendees at a neighboring Holocaust remembrance event. In total, 129 protesters were arrested.

This LGBTQ History Month, it’s especially important to reflect on progress and sacrifices made by and for LGBTQ communities, and the work still left to do. On April 20, 1990, AIDS was a death sentence, living in a gayborhood meant you could not get health insurance and most Americans thought homosexuality was immoral. April 20, 1990, was a victory – Cook County Hospital opened their AIDS ward to women within two days. April 20, 1990, was one more day in a decades-long tragedy – many attendees would themselves die of AIDS before antiretroviral treatments became widely accessible five years later.

Today, HIV/AIDS is a manageable chronic illness with proper treatment. But LGBTQ communities continue to face many health crises at the intersection of oppression and abandonment. Beyond headline-grabbers like Monkeypox, LGBTQ communities are at higher risk for mental health problems including suicide, nicotine addiction, HPV and Hepatitis. Queer women are saddled with higher breast cancer risks and the inaccessibility of IVF treatments. Queer men have battled a crystal meth epidemic for years.

Transgender and gender non-conforming Americans have also been targeted by nationalist and Christian extremist groups in recent years, such as the Proud Boys or Moms for Liberty. Gender-affirming care has become controversial due to a lack of public knowledge, and extremists and conspiracy theorists have filled the public square with untrue or grossly exaggerated claims about trans people in sports, the dangers of hormone replacement therapy (HRT) and more. Some states have banned or restricted necessary healthcare for trans children, labeled support for transgender people and drag performers as pedophilia or child abuse and banned certain aspects of transitioning. Under the self-appointed banner of protecting children, the same extremists are supporting policies which will cause trans and queer children to die.

All of this comes on top of the already-inaccessible state of gender-affirming care for most transgender adults. The long-established medical science around gender dysphoria, and research-backed treatment structures which include mental health treatment, social support, HRT and surgeries, do not matter to these radical extremists. They have whipped up a moral panic around a nonexistent world where children can supposedly walk into a clinic and be approved for physical surgeries without any safeguards. In reality, waitlists for gender-affirming care can be years long, even as the evidence that such care drastically improves the lives of patients remains ironclad. The abundant use of gender-affirming care like HRT, speech lessons and even cosmetic surgeries for cisgender patients always seems to be left out of the discussion. Instead, trans children and adults alike have been demonized for seeking the treatment most likely to help curb dysphoria that leads to severe depression and an unhappy life.

While the specific battles change year to year, the battlefield remains the same. Beyond the headlines lie the people at the heart of these stories, and we have always had to be unwilling warriors in our healthcare and beyond. Jack knows more about his healthcare needs as a gay man than all but a literal handful of all the medical professionals he's seen. As a non-binary person, Zach simply wishes to exist in the way that feels most sincere to them, and wants everyone else to have the same opportunity.

Confronting systemic homophobia and transphobia in healthcare is almost a rite of passage for LGBTQ young adults. Our communities led the response to Monkeypox when the government and most doctors sat on their hands. Our online forums overflow with users whose healthcare knowledge rivals that of MDs. Trans community mentors know by heart the words a transphobic psychiatrist needs to hear to grant a gender dysphoria diagnosis. It’s simultaneously a triumph of community bonds and a wholesale indictment of American medicine’s 20th century mindset.

It’s also a double-edged sword. In a nation where LGBTQ people, especially those who are trans, disabled or of color, are much less likely to have secure access to healthcare or health insurance, we bear a burden of survival through knowledge never expected of our cisgender, heterosexual peers. Surrounded by conspiracy theories, misinformation and the barriers to healthcare brought by bigotry, social isolation and poverty, many of us don’t make it.

In the chaos of conflicting narratives, communications professionals can help ground discussions of LGBTQ healthcare in truth. This can include explaining terminology, promoting scientific and media literacy, normalizing depictions of LGBTQ people, families and bodies, and having the courage to call out bad-faith actors. LGBTQ+ and cisgender, heterosexual communications professionals alike have enormous sway over clients, news outlets and the public at-large. Our communities were left to fend for themselves during the AIDS crisis, but that part of history does not have to repeat itself. 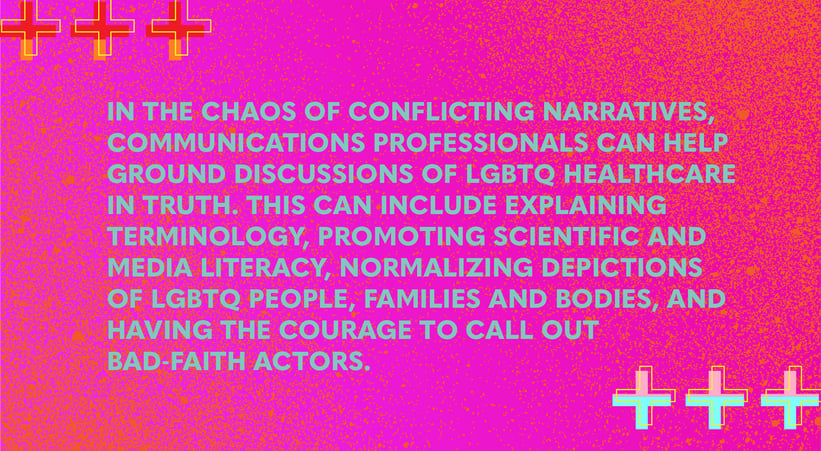 As we look forward to how we can support queer folks in our day-to-day, part of this comes from sharing this truth in our profession. Some in our lives may not understand how to critically analyze headlines and news stories in the same way we can, considering our line of work. It’s integral that we and other communications professionals share the truth with our communities to combat the fear created from falsified headlines and scare tactics.

It is not an exaggeration to say all the progress made on LGBTQ rights in the last 30 years is at-risk. In the face of a reactionary Supreme Court and the rise of the Proud Boys and other extremist groups, our communities are ready to continue the fight. But allyship is needed - not just nice words and social media posts, but real community, education, advocacy and mutual aid. Significant legal, financial and political support will be needed to win this battle, for LGBTQ Americans alive today, the memory of those we’ve lost and the future of those who will be born tomorrow.

If you would like to lend your support to trans communities, consider taking one of the following actions:

Marketing to Farmers Across the Cycle

Keeping Your Values in a Downturn Remains as Difficult, and Important, As Ever